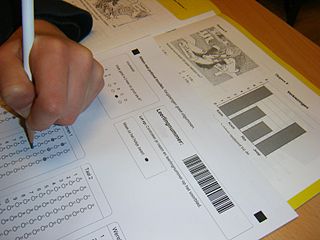 No digital devices in sight

The Los Angeles Times reported that California is coping, almost feverishly it seems, with new measures that require students to turn in digital devices before taking standardized tests.

“The proliferation of cellphones and their potential use for cheating has prompted heightened security measures on this year’s administration of standardized tests in California schools.”

In the previous year, students posted 36 questions from standardized exams on social media platforms.  The consequences were serious for those schools where the posts were from. The 12 schools are not eligible to receive academic awards the next year.

I’m sure that other states will soon need to create their own guidelines to prevent just such a thing.

So, what is the news here?

This is almost too obvious–taking away cell phones and digital devices during a test?

Teens would say “no kidding.”

What I found remarkable about the article, was that although very specific details were given of the egregious acts, the article did not mention that there was a concerns over so many teens engaging in cheating behaviors:

“In all, 249 individuals posted 442 images of test materials that were linked to 147 schools in 94 California school districts.”   (To be fair, “Most images were not of actual test questions.”)

There were no consequences mentioned in the article for the teens who posted the images or content.

However, we do know clearly the measures being taken to prevent such a thing in the future:

But we’re still left wondering if anyone is asking the big questions tied to these occurrences.

Specifically, was there any follow-up with the teens themselves?

What was the intention for these posts?

What are the ethical implications of these behaviors?

Did the students involved do this as a joke?

Was this an act of rebellion?

Or even the most primary question: Did the teens even think this was cheating?

I wrote some time ago about our role in guiding students toward moral clarity. At a later point, I wrote about how teens view cheating, and how shocking their experiences were to me.  This is an issue that won’t simply go away. It will get worse.

I remember not being surprised when corporations, in the realization that so many ethical issues were on the line, and after so many improprieties and illegal allegations, began hiring Chief Ethical Officers.

“The position of ethics officer is of relatively recent vintage, first appearing in the early 1990s, according to Forbes.com.

The job descriptions for Ethics Officers insures accountability between a code of ethics and actual operational procedures.

It’s not a bad idea to institute this position in some school districts. An even better idea is starting to think that way now.

As a Jewish educator my hope is to broaden opportunities for Jewish education and perhaps spur new ideas. If reading any post inspires you to hold new conversations and motivate change within the Jewish community, that would make me very happy. I'm interested in making a difference. END_OF_DOCUMENT_TOKEN_TO_BE_REPLACED
This entry was posted on Tuesday, May 7th, 2013 at 9:15 AM and tagged with education, Jewish Teens, Life, Parenting, Student, Teens and posted in Education, Jewish Teens, Judaism, Parenting, Social Media, Youth. You can follow any responses to this entry through the RSS 2.0 feed.
« How Jewish Teens Might View Rights, Responsibilities, and Radicalization
What Really Happens On A Teen Girl’s iPhone »

One response to “Teens: Cheating on Standardized Tests?”