“After my Bar Mitzvah, my Dad decided to convert. Will he be a real Jew then?” 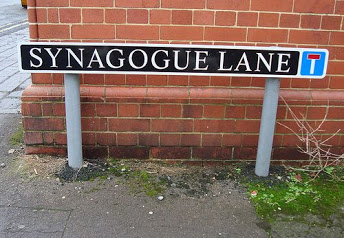 Some labels might be useful. Others, not so much.

I wasn’t prepared for such a troubling question by this earnest 8th grader in my class. He had been so patient; holding his hand up until the discussion we were having about interfaith families opened for questions.

The topic was Interfaith Families and the teens were very talkative during our workshop on sensitizing Jewish high school students to the many issues these families might face.

They had personal experiences about the issue, since about one-third of them were from those of interfaith families themselves.  The conversation had relevance for them and  they shared personal stories peppered with jokes, hurt feelings, and sometimes defiance.

The program was specifically designed for teens and consisted of film clips to trigger conversation and raise awareness.

His question came after I shared an experience I had when I was a teenager myself, while attending a large suburban Conservative synagogue in my town. I have a very clear memory of asking a congregant who someone was. He pointed to him and then lightly said: “Oh, this is Mr. So and So, who converted to Judaism….” I couldn’t figure out why I needed to know that. This man was forever labeled in my mind as ‘the one who converted.’

I’ve experienced this practice even as an adult. Why must we use labels?

Let’s come back to the boy sitting in front of me. He was obviously very concerned and wanted an answer. Yet, in the format of the program, with a full agenda and little time, I could not engage him in a full discussion of all the questions I wanted to ask him.

For example, why does he feel a need to ask this question? Does this first question represent other, more pressing questions about the choices his father made? What does he think about how the Jewish community responded to his father? Is it what he expected? Did he feel his Dad was welcomed? Rejected? Did he sense a total acceptance of the choice by his father’s family? Is he still wondering about his father’s reasons for conversion? Was it only for the ceremony or was there some deeper reason that his father made the choice he did? What impact did the father’s conversion have on him? Did it make him doubt his own choices going forward or feel more secure in them?

How would you respond to this student when there is so much more to discuss?

What I said next created some comedy, but my intention was to offer a really concrete example for this student: “Here’s how I see it. You know when someone gets his/her nose fixed? Or some cosmetic work done? Once it’s done, we no longer say, “You know, this is Ms. So and So…she recently got a nose job. We accept that the person has a new nose, and we move on. No need to reference it. We don’t need to go back to past history and label that person any differently than anyone else. Similarly, Your father’s Jewish. He’ll always be considered Jewish.”

He seemed to be reassured and we continued on with the discussion.

The students had a lot to say, and more questions to ask as the evening progressed.

The question above demonstrates just how much work we have to do to create more understanding among all of us about those who ‘choose Jewish’. Here are some tips to consider when a family member converts:

As a Jewish educator, I hope to broaden opportunities for learning and offer new ideas. If my posts inspire you to hold conversations and motivate change within the Jewish community, that would make me very happy. I'm interested in making a difference. END_OF_DOCUMENT_TOKEN_TO_BE_REPLACED
This entry was posted on Sunday, January 13th, 2013 at 2:00 AM and tagged with Adolescence, Conversion to Judaism, high school, Interfaith, InterfaithFamily, Judaism, Religion and Spirituality, supplementary school teachers and posted in Intermarried Families, Jewish Educators, Jewish Teens, Judaism, Parenting, Synagogue. You can follow any responses to this entry through the RSS 2.0 feed.
« Writings About Jewish Teens: Annual Review
Uphill Marketing to Jewish Teens »